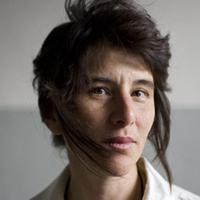 Fiona Tan trained in Hamburg and Amsterdam and works primarily with lens-based media. She is best known for her skillfully crafted video and film installations, in which explorations of memory, time, history and the role of the visual are key.

Fiona Tan has had solo exhibitions in musea and galleries worldwide including the MCA Chicago, De Pont Foundation, Tilburg, Vancouver Artgallery, the Sackler Galleries, Washington, the Aargauer Kunsthaus, Switzerland. Tan won the J.C. van Lanschot Prize for Sculpture in 1998, the Infinity Award for Art in 2004 and was awarded the DAAD Berlin scholarship in 2000/2001. She has been nominated for the Deutsche Börse Photography Prize and the Artes Mundi Prize. She is represented in many international public and private collections including the Tate Modern, London; Stedelijk Museum Amsterdam, Neue Nationalgalerie, Berlin, Schaulager, Basel, the New Museum, New York and the Centre Pompidou, Paris.