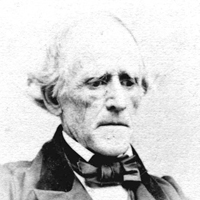 Fitz Henry Lane was born Nathaniel Rogers Lane in the fishing port of Gloucester, Massachusetts; in 1831 he legally changed his first and middle names, becoming Fitz Henry Lane. Paralyzed as a young child, probably by infantile polio, Lane was obliged to use crutches. He learned the rudiments of drawing and sketching while in his teens and in 1832 worked briefly with a lithographic firm in Gloucester. Later that year he moved to Boston for formal training and an apprenticeship with William S. Pendleton, owner of the city’s most important lithographic firm. Lane remained with Pendleton until 1837, producing illustrations for sheet music and scenic views.

While in Boston, Lane became acquainted with the work of the English-born artist Robert Salmon (1775-c.1845), who was the most accomplished marine painter in the area. Salmon’s paintings, with their meticulously detailed ships and crisply rendered effects of light and atmosphere had a decisive influence on Lane’s early style. By 1840 he had produced his first oils; two years later he was listed in a Boston almanac as a “Marine Painter.” His Scene at Sea (present location unknown) was exhibited at the Boston Atheneum in 1841 and, after 1845, his works were regularly shown there. During the mid-1840s Lane continued to produce both oils and lithographs, concentrating on landscapes, harbor views, and ship portraits. In 1848 he sold a painting to the American Art-Union in New York, which would subsequently purchase several more of his works. That summer he visited Maine with his life-long friend, the Gloucester merchant Joseph Stevens, Jr., whose family had a home in Castine. Lane would make many more visits to Maine during the rest of his life, and the distinctive scenery of the state became an increasingly important part of his artistic vocabulary.

In 1848 Lane moved permanently back to Gloucester, and with his sister and brother-in-law designed and constructed an impressive granite home overlooking the harbor. Although he traveled in the 1850s to such locations as Baltimore, New York, and, possibly, Puerto Rico, the scenery of Gloucester and Cape Ann would remain, with that of coastal Maine, at the very center of his artistic production. Although Lane’s inconsistency in dating his works makes determining a strict stylistic evolution difficult, he seems to have reached a new maturity in the early 1850s. In an important series of images of Boston harbor, presumably from the mid-1850s, Lane perfected a style characterized by carefully balanced, calmly ordered compositions and radiant effects of light and atmosphere. Some modern historians have seen these paintings as part of a “luminist” style said to have been employed by many other American artists of the 1850s and 1860s. Whatever the case, Lane’s art seems to have been primarily personal in nature, and there is little evidence he took notice of other painters’ works or was much involved in larger artistic circles.

During the 1860s Lane produced what are perhaps his most poignant paintings, again focussing primarily on familiar scenes around Gloucester and in Maine. He left little in the way of written or otherwise recorded statements about his art, but these later works are markedly different from works of just a few years earlier. Highly reductive in format, refined in execution, and intense in effect, these works suggest some new expressive intent on Lane’s part, the nature of which has been the subject of much modern speculation.