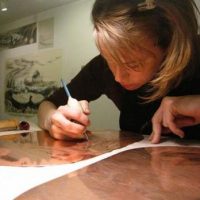 Fleming Jeffries began her studies in Printmaking in 1993 at the Moscow Studio in Russia, where she came into contact with a group of Russian Paper Architects. Since then, she has continued to investigate social criticism through the portrayal of unbuildable, metaphorical spaces. Her recent works (“Mechanical Ocean,” “Hydrofantasies & Mechano-morphisms”) explore the perceptual divide between human beings and nature in visual fantasies of engineered environment. Her current project, “Cloud Garden,” utilizes a garden theme to explore the realities and intricasicies of weather modification. A native of Washington, D.C., she has traveled extensively while completing a BFA in Printmaking and BA in Russian at the University of Alaska Anchorage in 1999; in 2004 a professional printer certificate at Tamarind Institute of Lithography, Albuquerque, New Mexico; and in 2007 an MFA in Printmaking at Rhode Island School of Design. 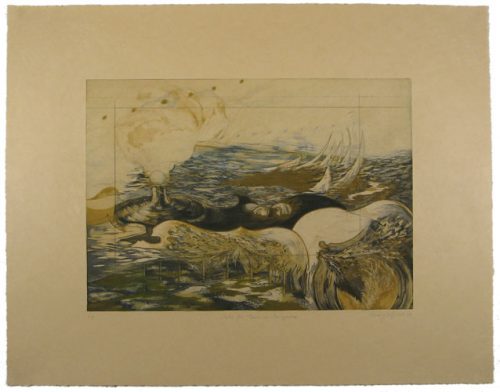