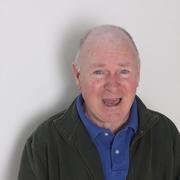 Frank Galuszka studied at Syracuse University and at Tyler School of Art of Temple University, with an MFA in 1972. He was a Fulbright Scholar in Romania during 1969-70.
Galuszka has had thirty solo exhibitions since 1970 including ten solo shows at the More Gallery, Philadelphia between 1982 and 2002. He also showed at the Nicolas Roerich Museum, NY, and at the Pennsylvania Academy.
He has shown in over eighty group shows including at Sherry French Gallery, New York, Bayly Museum, U of VA; at the Drawing Center, New York; The National Academy of Design, New York; Artist’s Choice Museum, New York; The National Academy of Sciences, Washington,; Galleria di Ca Pesaro, Venice; Galleria Primo Piano, Rome, The Philadelphia Museum of Art, Philadelphia. Galuszka is a professor of Art at UCSC where he teaches painting He has taught at the University of the Arts in Philadelphia, at Vermont College of Norwich University, Montpelier, at the Studio School of Painting and Sculpture in New York, at Tyler School of Art in Rome and in Philadelphia, at the Louisiana Tech Studies Center in Rome, and at The Aegean School of Fine Arts in Greece.
Galuszka served on the Philadelphia Art Commission from 1988 through 1992, as chairperson of the Art and Architecture Committee. He also served as member and chairperson of the Public Art Council of the City of Philadelphia. From 1994 to 1999 he served as President of the American Society for Cybernetics.
Galuszka curated and co-curated several exhibitions including “Abstract Icons”, Kling Gallery 1982, and “The Map Is Not The Territory”, UARTS 1992, “Intimate Landscape” 2006, and also “Mind-Body-Spirit: the paintings of Alex Grey” in 1990.