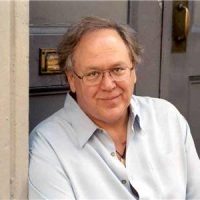 Frank Stefanko’s photos appear on the cover of Springsteen’s albums Darkness on the Edge of Town and The River, as well as in the packages for Springsteen’s Greatest Hits, Live 1975-1985 and Tracks.

Stefanko was born in Philadelphia, and has been absorbed by photography since he was given an old box-camera when about seven years of age. Among his early “teachers” and inspirations were stark, black and white film noir movies, cinematographers such as James Wong Howe, Fritz Lang, and reality photographers such as Diane Arbus, who shot every-day people in natural settings. Stefanko received fine-art training at Glassboro College (now Rowan University) in Glassboro, New Jersey.

It was at Glassboro College, in the mid-sixties, that Stefanko met and became friends with Patti Smith. He began photographing her even before Robert Mapplethorpe did. This friendship with Smith led to an introduction to Bruce Springsteen.

Stefanko’s photographs grace the album covers of Bruce Springsteen’s Darkness on the Edge of Town and The River, and also the cover of Southside Johnny’s Hearts of Stone album.[1] His photos appear in Springsteen’s Live 1975–1985 CD, in Tracks, Greatest Hits, in the book Greetings from E Street by Robert Santelli, American Madness by Julio Blanco, as well as in books by Dave Marsh.

Stefanko’s images have been shown in the exhibition “Springsteen: Troubadour of the Highway”, which toured the US from 2002–2004, sponsored by the Frederick R. Weisman Art Museum in Minneapolis. Colleen Sheehy, curator of the production is quoted as saying, “Frank Stefanko’s photographs show a sublime convergence of singer and image at a critical point in Springsteen’s career”.[2] The “Troubadour” show appeared at the Cranbrook Art Museum, The Experience Music Project, the Newark Museum of Art, and at Monmouth University.[3]

One-man photographic exhibitions with vintage silver-gel portraits by Stefanko include “Days of Hopes and Dreams: An Intimate Portrait of Bruce Springsteen” (Chris Murray, Director of the Govinda Gallery in Georgetown, DC, said, “The Haddonfield, New Jersey pictures …are among the best photographs of Springsteen.”