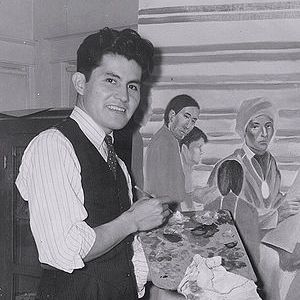 Franklin Gritts (1914-1996) was born in Vian, Oklahoma, 1914. Franklin Gritts was a painter and teacher. He was also known as Oau Nah Jusah or ‘They Have Returned.’

A Native American of the Cherokee tribe, Gritts attended Haskell Institute in Lawrence, Kansas, where he earned a Bachelor of FineArts degree. He studied at the University of Oklahoma in Norman, Oklahoma in 1939 and was a pupil of Olaf Nordmark.

Gritts painted a large mural on four walls gracing the entrance to the auditorium at Haskell Indian Nations University in Lawrence, Kansas. His oil painting of the great Sequoyah, who invented the Cherokee syllabify, is located there as well. The appreciation of Native American art which Gritts help to establish continues at Haskell to this day. Currently, Haskell Indian Art Market in Lawrence, a festival of two days, draws 30,000 people.

He illustrated the back cover of Grant Foreman’s The Five Civilized Tribes: a Brief History and a Century of Progress, published in 1948. Some of Gritts’ work resides in private collections. The Cherokee, A New True Book, by Emilie U. Lepthien, published in 1985, calls Gritts a famous Cherokee. 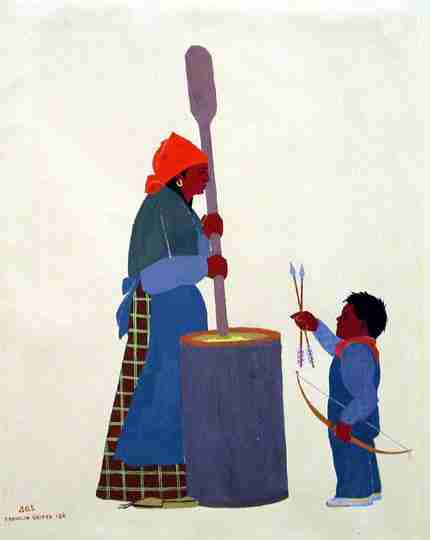