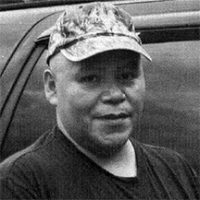 “My work is an expression of my God-given talent.” Fred Wilnoty was born to John and Elnora Wilnoty and came from a long genrational line of talented artisans. His father was a carver and his mother made baskets. Fred’s first desire in life was to go into the army and be a part of Special Forces but life had another plan for him. He discovered his God-given talent of carving like his father, and grandfather before him. With no formal training, he has been carving stone, wood and sometimes bone for the past twenty years. He learned his art from watching his father who always encouraged him to develop his talent. Fred loves to pick up a piece of stone and begin to cut away at it to see what’s waiting inside. Artistic talent has been passed down over the generations…Fred remembers his grandfather, Julius Wilnoty, made ceremonial pipes, as well as bows and arrows, even knapping the arrowhead himself. In addition to his father, his other two brothers also have a talent for carving. Fred’s two sons are showing an interest in the arts as well. Fred has been recognized with various awards for his carvings.