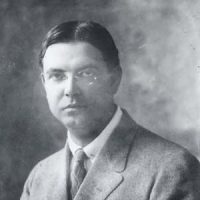 Frederick Carl Frieseke was born on April 7, 1874, in Owosso, Michigan. After studying for a short while at the Art Institute of Chicago and the Art Students League in New York, Frieseke left for France in 1898, and almost all of his career was spent as an expatriate, with ties to the United States maintained through his New York dealer, William MacBeth, and by occasional visits to America. Following the pattern of innumerable young Americans, he enrolled at the Academie Julian where he studied with Benjamin Constant (1845-1902) and Jean-Paul Laurens (1838-1921). He appears to have had at least brief contact with and to have been influenced by James McNeill Whistler, who had recently opened his Academie Carmen in Paris.

By 1900 Frieseke was spending summers in the town of Giverny, made famous by the residence of Monet and subsequently by other artists, among them many Americans. In 1906, the year after his marriage to Sarah O’Bryan, he leased a house once occupied by the American Impressionist Theodore Robinson. Although the property was adjacent to Monet’s, Frieseke had only limited contact with the French master. Instead he apparently found Pierre Auguste Renoir the most influential of all the Impressionists. Frieseke’s Giverny house and garden, as settings for a series of female models, provided nearly all of his subject matter for the next thirty years, although in 1930 he made a series of watercolors of Florida scenes remembered from his childhood and painted some Swiss landscapes. After World War I, the artist and his family settled in Normandy.

At the height of his career, in the 1910s and early 1920s, Frieseke was perhaps the most popular of all living American artists. He received numerous awards and medals and saw his work purchased by private collectors and major museums. Decades after the initial introduction of Impressionism by Monet and his contemporaries, Frieseke assumed this style for his work, choosing to ignore the newer artistic movements of the early twentieth century. Nevertheless, his paintings were acclaimed in both the United States and in Europe. In 1904 he won a silver medal at the St. Louis Universal Exposition and a gold medal at Munich. He was elected a member of the Société National des Beaux Arts in 1908 and the National Academy of Design in 1912. Seventeen of his canvases were featured at the Venice Biennale in 1909 and he won the Grand Prize at the Panama-Pacific International Exposition in 1915. He was commissioned to execute several murals, including one for the New York store of John Wanamaker, one of his most loyal patrons. He died on August 28, 1939, at his home in Normandy, in the town of Le Mesnil sur Blangy. In the decades following his death, however, after artistic tastes had changed considerably, his work was nearly forgotten until it received renewed attention as interest in American Impressionism grew in the 1960s.