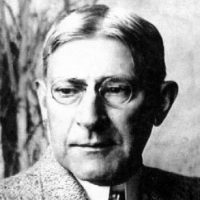 Frederick Mulhaupt was born in Rockport, Missouri, the son of Jacob Mulhaupt of Baden and Margeret Liebig of Hesse-Darmstadt, Germany. He grew up in the small town of Kiowa on the southern border of Kansas, a wild unsettle Indian territory. The majority of his professional career was spent in NYC, Boston and East Gloucester, MA. He studied painting at the Kansas City School of Design after a failed attempt at becoming a newspaper reporter in that city. He then became a student at the Art Institute of Chicago, where he taught figure painting in 1902. Rather than training in Munich like so many German painters from America, Mulhaupt studied in Paris and exhibited paintings at the National Academy of Moret, France and St. Ives (Cornwall), England. When he returned from Europe, his address was at the Salmagundi Club in NYC (winters). He began summering in Cape Ann around 1900, exhibited in 1917 at the Gallery-on-the-Moors in Gloucester (which became the North Shore AA in 1922) and in that same year Mulhaupt settled in Gloucester and focused on painting its harbors and landscape views.
Known to have a reclusive personality, Mulhaupt kept to himself and seriously painted but he did not like to socialize. However, he did marry Agnes Leone Kingsley (a teacher) in 1921 and they had a son Frederick (1922). His major studio was as close to the ocean as it could be, located on pilings in Gloucester Harbor on Rocky Neck and to the studio students flocked.

Mulhaupt was a member of the North Shore Art Association from 1923 until his death, where he exhibited many local paintings and held various positions. He became an Associate of the National Academy (1926) and was a member of the National Arts Club, Salmagundi Club, Allied Artists, Palette & Chisel (co-founder, Chicago), Boston Arts Club, Rockport AA; American Art Association in Paris and the Artists Fund Association. Although considered a “post impressionist” the work of Mulhaupt is impressionistic, each stroke juxtaposing the next in color and hue. The competent artist had studios and taught in NYC, Chicago and Gloucester and painted in the U.S., Canada, England, France and Spain. His awards include the Evans Prize at the Salmagundi Club (NY, 1907) and its Porter Prize (1921); Minneapolis, MN Popular Prize (1924); awards at the Allied Artists of America (NY, 1925, 1930); a landscape medal from the Philadelphia Sesqui-Centennial (1925); the Bunce Prize, CT Academy of F.A. (1927); prizes at the Ogunquit AA (1931, 1932) and more. He is represented at the Butler Art Institute, Youngstown, OH; Reading Public Library, Reading, PA; John Herron Institute, IND; College Museum, Wake Forest, NC; National Arts, NYC; National Academy, NYC; Buffalo NY Mural of McKinley; Champlain Mural, Chazy, NY; and elsewhere.