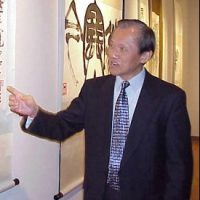 Master Fu Shen was born in Shanghai in 1937 during the second Sino-Japanese War. While a teenager, his family moved to Taiwan, where he later received first prizes in painting, calligraphy, and seal carving. A gifted artist, Master Fu also demonstrated an aptitude for authenticating calligraphy and painting—a passion that set him on an academic path, as well as on a path to the United States. After earning his doctorate at Princeton University (New Jersey), he established himself as a leading scholar at Yale University (New Haven, Connecticut) and the Smithsonian Institution’s Freer and Sackler Galleries in Washington, D.C. Following two decades of work and study in the United States, Master Fu returned to Taipei, where he took on key roles at the University of Taiwan and the National Palace Museum—again, as both scholar and artist.