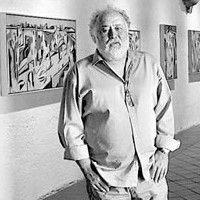 A native of Guadalajara, Gabriel Macotela is considered Mexico’s Renaissance man, skilled in sculpture, drawing, engraving, painting, and set design. His art helped develop a critical discourse concerning social phenomena, as well as urban themes that center around the relationships between humanity, the world economy, and incongruities of capitalism. He is an artist committed to the world around him, one who strives to make a positive impact on society where he can.

Macotela attended La Esmeralda and graduated from the National School of Plastic Arts, both in Mexico City. He founded a publishing house called Cocina Ediciones in 1977 and became owner of the alternative library El Archivero in 1985. He painted murals for the Faculty of Medicine building at his alma mater and wrote a play titled Silent March, which was presented at the Leon Trotsky Museum, Mexico City. Among his numerous accolades are the National Institute of Fine Arts acquisition award, the Toy-Art Object prize at the José Luis Cuevas Museum, and a grant from the National Fund for Culture and Arts’ Project and Conversion Promotion Program for the Paper Workshop in Oaxaca, Mexico. Macotela was an active participant in the biennials hosted in Havana; São Paulo; Buenos Aires, Argentina; and Cuenca, Ecuador. He has exhibited worldwide since 1976, namely at the Consulate of Mexico in Barcelona and the Cultural Center of Mexico in Paris.