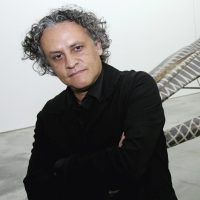 Gabriel Orozco lives and works in New York, Paris and Mexico City. Following his first exhibition in 1983, Orozco has had solo exhibitions at the Musée d’Art Moderne de la Ville de Paris in 1995 and 1998, the Serpentine Gallery in London in 2004 and the Museo del Palacio de Bellas Artes, Mexico in 2006. He has had traveling retrospectives at the Kunsthalle Zürich in 1996-97 and the Museum of Contemporary Art in Los Angeles in 2000-01. He has participated in the Venice Biennial, the Whitney Biennal and Documenta X and XI. He has received numerous awards including the Seccio Espacios Alternativos prize at the Salon Nacional de Artes Plasticas in Mexico City, a DAAD artist-inresidence grant in Berlin and the German Blue Orange prize. Orozco’s work was the subject of a retrospective exhibition beginning in December 2009 at the Museum of Modern Art in New York City after which the works will go on tour to the Kunstmuseum Basel in Switzerland, the Museé National d’Art Moderne, Centre Georges Pompidou in Paris, France and to the Tate Modern in London, England.