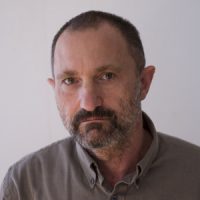 Gary Schneider was born in South Africa and moved to New York where has lived since 1977. He has a Bachelor of Fine Art from the Michaelis School of Fine Art in Cape Town and a Master of Fine Art from Pratt Institute in New York. In the 1970’s Gary worked in the theatre of Richard Foreman and Robert Wilson. He was also making films into the 1980’s which were included in local and international film festivals through 1986. He has been exhibiting his photography internationally since 1991. Schneider is best known for the ‘Genetic Self-Portrait’ installation, which was completed in 1998. It was exhibited in the United States at The Santa Barbara Museum, Massachusetts Museum of Contemporary Art, The International Center of Photography and at The Musee de L’Elysee, Lausanne, Switzerland. It continues to travel. Light Work, Syracuse New York, published the ‘Genetic Self-Portrait’ book in 1999. In 2000 it received an Eisenstadt award from Life Magazine. In 2004, a survey ‘Gary Schneider: Portraits’ was mounted at the Sackler Museum, Harvard University, Boston and received a National Endowment for The Arts grant. Yale University Press and Harvard University Art Museums published the catalog. In 2005 he received the Lou Stoumen Award from Museum of Photographic Art in San Diego. In 2005/6 His ‘Nudes’ was published by Aperture as a book and exhibited at Aperture Gallery. In 2007 his ‘Nudes’ were included in ‘The Naked Portrait’ exhibition at the National Portrait Gallery of Scotland. In 2010 ‘Nudes’ travelled to The Reykjavik Art Museum, Reykjavik, Iceland. In 2008 ‘Flesh: The Portraiture of Gary Schneider’ was exhibited at The Museum of Photographic Art in San Diego. In 2009 ‘Gary Schneider: Life @ Life Size’ was exhibited at the Contemporary Art Galleries, University of Connecticut. His ‘HandBook’ was published by Aperture in 2010 as an artist book. Schneider’s work is represented in many museums including The Whitney Museum of American Art, The National Gallery of Canada, The Guggenheim Museum, The Art Institute of Chicago, George Eastman House, The Metropolitan Museum of Art in New York, Musee de l’Elysee Lausanne, Harvard University Art Museum, and Boston Museum of Fine Art.