Born outside Boston, Massachusetts, George Curtis remained in Boston from 1843-60 designing scenery for plays at the Boston Museum. In 1857 he and Minard Lewis designed scenery for a Boston production of a play based on Kane’s voyages in the Arctic, he also did the scenery for “The Drunkard.” He traveled around the Northeast, Midwest (St. Louis, late 1830s), and to Europe.

He began building his reputation in the 1860s as a luminist marine painter, often of Arctic subjects. He exhibited in Boston, whose harbors, shore lines and wharves were his inspiration. Influenced by other luminists such as Fitz Hugh Lane, he showed the transitional effects of light and atmosphere. In the latter part of his career, his interest shifted to the New York area where he painted several ship portraits.

Sources include:
Groce and Wallace, The New York Historical Society’s Dictionary of Artists in America
Peter Hastings Falk (editor), Who Was Who in American Art 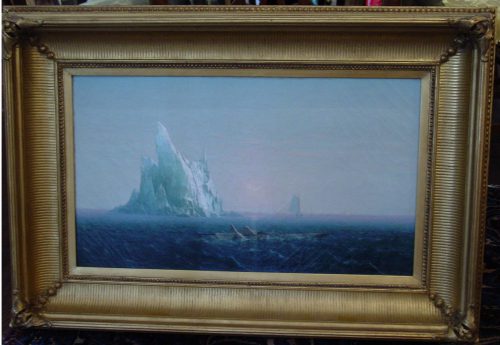