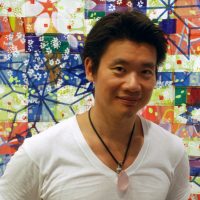 George Ho was born in Taiwan in 1968 and educated in the United States since the age of 11. He received his B.A. in Visual and Environmental Studies from Harvard University and pursued further studies in painting and sculpture at the New York Studio School in New York City. He maintained a painting studio in New York from 1995 until the end of 2003, when he moved his studio back to Taipei.

George is partial to combining text and image in his artwork. On one hand, this is influence by his interests in traditional art from different cultures that exhibit this combination of text and image, such as Chinese and Japanese paintings, the Persian Miniature paintings, and the Medieval Illuminated Manuscripts. More importantly, George employs the text and image combination to stimulate the viewer’s imagination, for often the text and the imagery he chooses are slightly disjointed. He believes when there is a slight mental distance between the text and the imagery, the work is made richer as it calls for the viewer’s input to fill in the gap.

In addition to regularly scheduled exhibitions in galleries, George also creates large scale public art. A recent example is a 3 x 12 meters permanent public art mural for the lobby of the National Theater completed at the end of 2009. His upcoming exhibition is scheduled for March of 2011 at the Pema Lamo Gallery in Taipei. 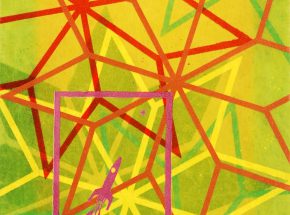