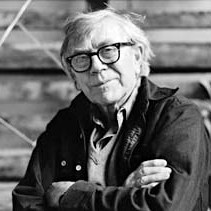 When Rickey was a child, his father, an executive with Singer Sewing Machine Company, moved the family to Helensburgh, Scotland. Rickey was educated at Glenalmond College and received a degree in History from Balliol College, Oxford. He spent a short time traveling Europe and studied art in Paris. He then returned to the United States and began teaching at the Groton School, where among his many students was future National Security Advisor McGeorge Bundy.

After leaving Groton, Rickey worked at various schools throughout the country as part of the Carnegie Corporation’s Visiting Artists/Artists in Residence program (partially funded by the Works Progress Administration). His focus was primarily on painting. While taking part in these programs, he painted portraits, taught classes, and created a set of murals at Knox College, Galesburg, IL.

In 1942, Rickey joined the United States Army, where he worked in engineering. Following his discharge, he studied art at the New York University Institute of Fine Arts and later at the Chicago Institute of Design, funded by the G.I. Bill. He taught art at variety of colleges, including Muhlenberg College. While at Muhlenberg, J. I. Rodale commissioned Rickey to illustrate an edition of Anton Chekhov’s The Beggar and Other Tales. Rickey later moved on to Indiana University South Bend. There, he met and was inspired by the work of David Smith.

Beginning in the early-1950s, Rickey shifted his focus from painting to sculpture and began creating kinetic sculpture. In his own work, Rickey combined his love of engineering and mechanics, Smith’s graceful, yet solid, cubic forms, and the mobiles of Alexander Calder. Rickey was able to design sculptures whose metal parts moved in response to the slightest air currents. These parts were often very large, sometimes weighing tons.

In works such as Two Open Triangles Up Gyratory Rickey’s two wind driven elements (geared down so that in high winds the parts are not dangerous) provide an endless series of combined, almost dance like, shapes and movements.
Most of his work was created in his studio in East Chatham, NY, where he moved after taking a position as a professor of architecture at Rensselaer Polytechnic Institute in Troy, NY. His kinetic sculpture titled “Two Rectangles, Vertical Gyratory Up” was a central element of the Rensselaer campus from 1972 until its removal in 1984. (The sculpture was universally known among students as the “Chrinitoid” after an article in a campus humor magazine parodying the long-running Reader’s Digest series was titled “I am Joe’s Chrinitoid” and included a drawing resembling the sculpture.)

There is a smaller broken sculpture located at the NYS Department of Labor Office (Building 12). This device originally had six pointed arms connected to a spring/shock absorber system. It is missing one of the arms. The remaining five arms are still swinging in the wind. It sits in a broken fountain in front of a 9/11 memorial.

In 1985, George Rickey had a retrospective of over 100 of his sculptures in South Bend, Indiana. The pieces were installed outside (and inside) of the South Bend Art Center, on the campus of the University of Notre Dame, and at the Snite Museum of Art at Notre Dame. Accompanied by his wife, Mr. Rickey personally gave a presentation of his work at the Snite, including drawings, recalling the entire history of his life including his childhood. One of the stories he told concerned how, as a result of a WWII-era, government-administered aptitude test, he was assigned to design machine gun turrets for bombers. It was in this job that he became familiar with the high-quality ball bearings, balancing weights, riveted sheet metal, lightweight aircraft construction techniques and modern hardware (and the vendors for same) that were to become the mechanical foundation for his later forays into lightweight, delicately balanced, wind-activated kinetic sculpture. Another story concerned one his earliest memories of how, as a very small child in South Bend, he was fascinated by the window latches in his South Bend home; these latches, which can be found in many historic South Bend homes, operate conically at counter-intuitive angles that are oblique to the “apparent” design of the otherwise rectilinear form of the latch. “One expects the latch to open by pulling, but it’s a conical crank, you see.” This conical, oblique design shows up in many of the most emblematic of George Rickey’s works, where the axes of motion are surprising given the rectilinear forms of his work.

He also lived and worked in Berlin for a short time. In his later years, he divided his time between his home in East Chatham, Santa Barbara, California and Saint Paul, Minnesota.

He died at his home in Saint Paul, Minnesota at the age of 95.
In 2010, his sculpture “Two Open Rectangles, Horizontal” that was located in situ west of the SBC (now ATT) office building in downtown Dallas was moved to a site just outside the Bob Hope Peristyle Courtyard of the Owen Art Center, which houses SMU’s Meadows School of the Arts.