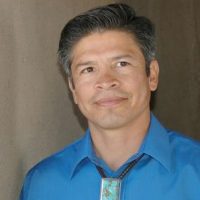 George Rivera, Governor of the Pueblo of Pojoaque in northern New Mexico is a man of many talents. He has served his Pueblo since 1992 as Lt. Governor and was appointed and soon elected Governor upon the passing of former longtime Governor Jacob Viarrial.
George is also a Native American artist and has been sculpting and teaching art for over 20 years. His work centers primarily on monumental stone and bronze sculpture, painting and architectural design. The driving force behind all of his creations is the Native American Pueblo culture. George’s artwork reflects the symbolism and realism of both the past and present-day life of the pueblo people. Many of his subjects focus on pueblo dancers. One of his recent pieces, on permanent display in the Pueblo of Pojoaque, is a12-ton monumental sculpture of a buffalo, carved from Virginia soapstone. For Rivera, the buffalo is a symbol of stability for his tribe, both culturally and economically. His newest monumental creations, on display at the Buffalo Thunder Resort and Casino, include a bronze Buffalo Dancer, Deer Dancer and Butterfly Dancer. He is responsible for the architectural style and aesthetics of this outstanding resort.
In addition to being an art instructor, George has been a teacher and cultural preservationist for his family and extended pueblo community. He has served on the Board of Directors of the Southwest Association of Indian Arts (SWAIA), has been a panelist for the New Mexico Arts Division, a guest lecturer at several colleges and was a participant in the 1995 U.S./China Arts Exchange in Kunming, China.
Rivera is a graduate of the California College of Arts and Crafts in Oakland, California, the Institute of American Indian Arts in Santa Fe, New Mexico and the Lacoste School of Arts in Lacoste, France. At the latter, he held a teaching assistant position in sculpture and was an apprentice to a Japanese master sculptor during his three-year stay in France. His work is in many international collections.
George returned to New Mexico from France with a vision to revitalize traditional pueblo arts and culture, not only for his own pueblo, but for an extended Indian family as well. The result of this vision is the Poeh Cultural Center and Museum, an education and museum facility with working art studios and the permanent exhibit Nah Poeh Meng, meaning “the continuous path”, which portrays pueblo history within the pueblo world view. Today, traditional arts, language and culture are returning to Native American pueblo life after having been at critical risk for survival in the modern day world. George works and shows at the Pueblo where he resides with his wife Felicia and children PaaWee, Poqueen, Valentino and Iris Paloma.