George Rodney was born in St. Catherine, Jamaica. He studied at the Jamaica School of Art and at the Art Students League, New York. Rodney is one of the pioneers of the modern Jamaican art movement. He was awarded the Institute of Jamaica’s Silver Musgrave Medal in 1975, its Centenary Medal in 1981, the Jamaica Festival’s Gold Medal in 1982, and the Jamaican Prime Minister’s Medal of Appreciation in 1983, among many other awards. Rodney’s semi-abstract treatment of space, his brilliant draughtsmanship and strong composition elements harmonize to depict the light, mood and color of Jamaica. Although he rarely stages exhibitions, this master’s work is very highly sought after. 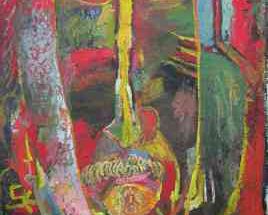