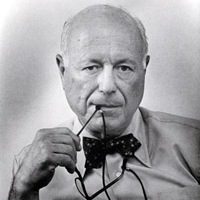 George Tames was an American photographer for The New York Times from 1945-1985. As a newspaper photographer, Tames was a regular on Capitol Hill over a span of forty years.

Born in Washington, D.C., Tames was a first generation Albanian American who couldn’t speak English when he went to school. He dropped out of high school in the tenth grade, and took a job as an officeboy in the Washington bureau of Time-Life to help out the family.

His career in photography began in 1940 in Washington D.C. Tames went with the Capitol Hill photographers on assignments and eventually photographed individual members. He photographed Harry Truman’s War Investigating Committee. He developed access to and captured the likeness of numerous members of the United States Congress, and had his work reproduced in many influential publications. He developed a style contrary to the “herd instinct” of press photographers, demonstrating his artistic eye, sense of place, and special intimacy with his subjects.