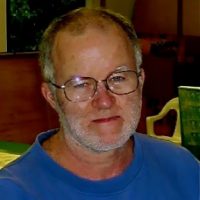 George Woollard has been a resident of Hawaii since 1962. He studied painting and printmaking at the University of Hawaii earning an undergraduate degree and a Master’s degree in 1977. He has also studied painting in France in Aix-en-Provence and won an artist’s fellowship in printmaking at the Cite Internationale des Arts in Paris. George has been teaching painting and printmaking since 1977 at the University of Hawaii and at the Honolulu Academy of Arts. He has personally led fourteen art retreats in Europe and has taught at the Lacoste School of the Arts in France. He has had numerous personal shows in Hawaii and also in Korea, Japan, France, Germany, Finland and Italy. His work can be found in many public and private collections including the Honolulu Academy of Arts, the Contemporary Museum, Persis Foundation, Exxon Corp. Kaiser Permanente, Bank of Hawaii, the University of Hawaii, the University of Guam, Norwegian Cruise Line, and Four Seasons Resort. George’s work is an exploration of color.