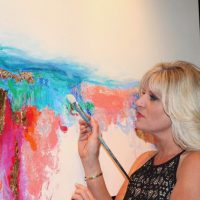 Georgeana Ireland is a Southern California artist specializing in large scale Lyrical Abstract Art. Her artistic process began as a child; artistic talent runs on both side of the family. As a teenager she painted many hours a day and she began exhibiting in galleries at age 19. She studied privately with numerous teachers but primarily she considers herself autodidactic. Her greatest influence as an artist was a period of intense travel around the world- 43 countries. She spent many hours in museums taking notes and “dissecting” the art with her eyes as photography was not allowed. She feels the museums were her greatest teacher. Her current body of work is large scale and has a dreamy narrative quality to it. A noted colorist she paints with thick impasto layers in oil and acrylic and then adds diamond dust, 24k gold leaf and holographic pigments. The Los Angeles Cultural Affairs and Los Angeles World Airports (LAX) selected Georgeana’s monumental work Twilight Mood 6 ’x 24’ for a 3 year exhibition. In 2015, the Museum of Latin American Art selected Georgeana Ireland and Vladimir Cora to paint Tres Graces Long Beach as a live performance in the museum. Starting with a blank canvas, neither of the artists spoke the others language, so the painting was created using the language of paint. Georgeana went on to do more collaborative projects. In September, 2016 she joined artists Pierre H Matisse (89, grandson of Henri Matisse) and artist Lisa Palombo to create the large scale painting Liberty and Love. The piece was unveiled at Pierre H Matisse’s one man show at the Albin Polasek Museum in Winter Park, Florida.

Georgeana Irelands paintings can be found collectors private estates and public collections across the US. In addition, she has shown numerous museum exhibitions and gallery art shows around the world. 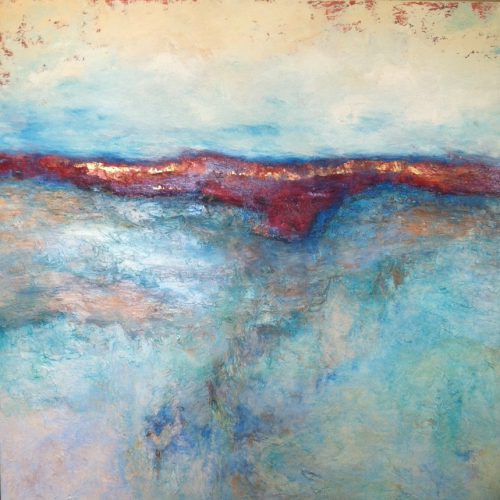 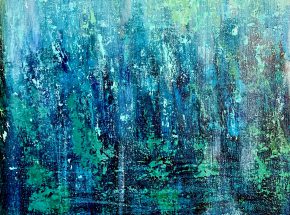