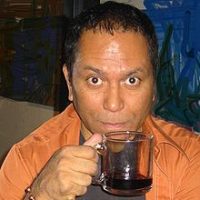 Glugio “Gronk” Nicandro utilizes various techniques to express humor and his Chicano heritage. He helped form the Los Angeles artist group titled ASCO in 1971, consisting Willie Herrón, Patssi Valdez, and Harry Gamboa Jr. The word ASCO in English means nausea. This group focused on promoting performances that dealt with social commentary and irony. The group participated in street performances such as Day of the Dead celebrations, anti-war protests, and movement/instant murals. The “instant murals” or spontaneous acts consisted of staged events against a wall.

Gronk then turned to drawing, paintings, and solo performances. In 1978 he began to keep a visual diary that now consists of more than 250 volumes. He utilizes his roots and his surrounding environment as a foundation to structure a narrative story through art. Some of his paintings include a theme of the melodrama of the photo-novellas popular in Mexico, a tabloid of papers as Alarma. His projections of city life concerns such as addiction, prostitution, violence, and tragedy become noticeable in his 13 Portals to the Underworld in acrylic in the exhibition titled, Hotel Senator. He meshes the experience of his characters with their surrounding space through a stylized interpretation. Gronk has recently been working extensively with sound, music and the relation it can have to the physicality of painting in a series entitled La Tormenta Cantata.

He has participated in extensive solo and group exhibitions. His solo exhibitions include, “China is Near,” at the William Traver Gallery, Seattle, WA; “Coming Home Again,” Vincent Price Gallery, East Los Angeles College, CA; and “Hotel Senator,” Saxon-Lee Gallery, Los Angeles, CA in 1990. “Some group exhibitions he participated in 1990 were “Chicano Art/Resistance and Affirmation, 1965-1985,” Wight Art Gallery, UCLA. This exhibition traveled to the Denver Museum, the Alburquerque Museum, The National Museum of Art, The San Francisco Museum of Modern Art, and The Tucson Art Museum through 1993. From 1989-1990 he exhibited in the Los Angeles Country Museum of Art in CA, “Hispanic Art on Paper”; “Les Demon Des Anges,” traveled to Museums in Nantes, Barcelona, Stockholm, and Paris. He also participated in the “Ten Latino Artists,” Jack Tilton Gallery in New York, NY and “Cultural Currents,” San Diego Museum of Modern Art, San Diego, CA. He currently resides in Los Angeles, CA. In 1985, he participated with the ASCO group in, “Asco 1984,” Armory for the Arts, Santa Fe, New Mexico and in “Asco 1982,” Galeria de la Raza, San Francisco, CA.; 1987 ” Hispanic Art in the United States: Thirty Contemporary Painter and Sculptors,” Museum of Fine Arts, Houston, TX. Traveling Exhibition to six museums across the U.S.; 1988 “Cultural Currents,” San Diego Museum of Art, CA.