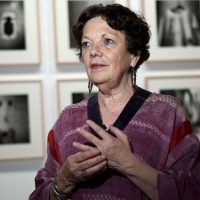 Graciela Iturbide married the architect Manuel Rocha Diaz in 1962. She had three children from this marriage. She studied cinema at the CUEC film school in the University of Mexico. Iturbide’s six year old daughter died in 1970; this led her to inner search, which in turn led her to discover her interest in photography. Between 1970 and 1971, Iturbide collaborated with famous Mexican photographer Manuel Alvarez Bravo. Additionally, she had studied filmography at Mexico’s “Centro Unversitario de Estudios Cinematograficos”, a division of the UNAM university. While working with Alvarez Bravo, she also learned photography techniques used by the celebrated photographer.

Along with Alvarez Bravo, Iturbide began to explore Mexico’s indigenous areas–Indigenous influence would surface later on in her career as a photographer. In 1974, she received the Eugene Smith grant for humanitarian photography, and a scholarship at the Guggenheim college.

In 1979, Iturbide was asked by a man to photograph his village. Interested by the proposal, Iturbide released her first collection, titled “Mujer Angel” (“Angel Woman”) and shot at Mexico’s portion of the Sonoran desert. Her first experience as a photographer shaped Iturbide’s views on life, making her a strong supporter of feminism.

Some of the inspiration for her next work came from her support of feminist causes. Her well known collection, “Señora de Las Iguanas”, (“Our Lady of the Iguanas”) was shot in Juchitan, Oaxaca, a city where women dominated town life. Her work in Juchitan was not only about women, however: she also shot “Magnolia”, a photo of a man wearing a dress and looking at himself on a mirror. It was “Magnolia” that has led many photography experts to say that Iturbide also explored sexuality among Mexicans with her work.Graciela Iturbide liked Oaxaca, and in 1986, she returned to that area for more photos.

Iturbide also worked in Argentina (during 1996), India (where she shot another well known photo of hers, “Perros Perdidos”, or “Lost Dogs”), and the United States, where she did her last known work, an untitled collection of photos shot in Texas.