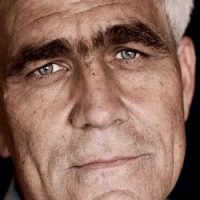 Wood has been an integral part of my evolution from childhood into adulthood and from craftsman into sculptor.

As a young child, I marveled at my father notching cypress logs as the cabin in which I grew up in the early 1950s took shape. Growing up with those interior logs, combined with the mystery of an old decoy my grandmother had given me from her attic, pressed something deep in me. I remember well my mother holding me up by my belt and her encouraging words as she allowed me to saw an extended exterior log from that cabin for my first bird. That is when I first peered over the edge of the nest into the world of sculpture.

Carving a few birds and decoys as a teenager and working as a carpenter’s helper not only strengthened my allegiance to wood, but also revealed a love of working with my hands. This love has only deepened with time.

Leaving home to study architecture at Clemson University turned eventually into a Bachelor of Science degree in biology, which was, as I look back on it, a continuation of what was quickened in me as I grew up next to those cypress logs and a decoy.

For the quarter century since then, the pursuit of the flight of birds in wood has been a passion of mine. The sculptor in me began to emerge as I worked under the wing of Gilbert Maggioni of Beaufort, South Carolina, for two years in the early 1970s. He challenged me like no one before or since. Gilbert inoculated me against mediocrity while at the same time encouraging innovation and preaching there is no substitute for hard work. Although I had long since left the nest, I was still precariously perched on an outer limb, not knowing where to fly. Gilbert kicked me from that position to soar toward a vision on the horizon his eyes had seen, but mine were not accustomed to. The first flight was the point in my life when inertia was overcome, and I began that slow, arduous process which continues to this day of becoming a sculptor.

With my path lit with the torch of Maggioni’s enthusiasm, encouragement and work ethic, I continued to push wood and my subject matter to their limit. I believe that over the years I have been able to make wood fly, yet all along I knew there was more to be discovered and tested. Recently, the possibilities and boundaries of wood have been extended again as if a whole new territory has been opened for discovery and development. A peephole was given me into this new territory when I had a mold made from a wooden feather into which bronze and later sterling was poured.

That feather triggered more feathers, then eventually a whole bird in bronze. This is not an abandonment of wood, rather using it directly to bring these birds out from behind their glass cases while retaining the detail and lightness wood has allowed me over the years. Having flown from Gilbert’s vortex early in my creative experience, and then spending the next 25 years pressed to the grindstone of making a living with my hands, I’m prepared to continue to rise to the challenges that wood and metal offer. My vision is to make these materials fly as they have never flown before.