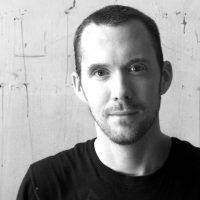 Greg Minah grew up in Columbia, Maryland, a suburb located between Baltimore and Washington, D.C. Minah attended the University of Maryland at College Park and graduated with honors in 2001 with degrees in English Literature and Studio Art. Upon graduating, Minah was awarded a Colonel Wharton Award for outstanding achievement in painting. In 2002, Minah moved to Baltimore and explored the sculptural and conceptual possibilities of painting as a medium by creating a series of cut painting assemblages, installations and videos. This work eventually lead to a renewed enthusiasm for acrylic painting on canvas which is reflected in his current body of work. Recently, Minah was one of nine artists from around the world that took part in the 2008 Joshua Tree Highlands Artist Residency. He followed up the residency with a solo exhibition of recent work at Fusion Gallery in New Jersey, his second solo showing there in 2008. Minah was honored as a finalist in both the 2009 Bethesda Painting Awards and the 2009 Trawick Prize and received the Juror’s Choice Award from Doreen Bolger, the Director of the Baltimore Museum of Art. In February of 2010, Minah was awarded an Individual Artist Grant from the Maryland State Arts Council. In 2011, 10 of Minah’s paintings were reproduced at high quality and permanently installed on an outdoor public wall in Crystal City, Virginia. Minah currently lives and works in Baltimore, Maryland. 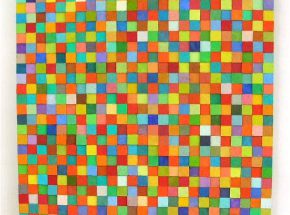