Grigoris Lagos’s works begin with real maps, layering his own imaginative interpretation of each city on top of a factual, geographical tool. In a city like Manhattan or especially Athens, the past is in constant interaction with the present, and Lagos contributes his own layer to the many layers of civilization that often exist beneath a city. Lagos has described his interest in “the tensions created by the rapid development and spreading of cities, presenting architectural contrasts and projecting their traces on the map with a particular stylistic and iconic character.” His work serves as a reminder that cities are living, growing organisms, and any map is accurate only in the moment it’s created, rapidly becoming an irrelevant relic. In this way, a city map is like a snapshot, describing only one of many past and future incarnations the structure will take: “The artwork theoretically is like an archive, because the city itself will never be the same. So, for example, no matter how many times one may want to depict New York, it will never be the same, and the artwork will be unique simply because it depicts a different historical moment.”

Grigoris Lagos studied at the Athens School of Fine Arts from 1986–1991, and worked as a set designer from 1990–1991. His work has been included in solo exhibitions at Gallery 3 and Gallery Kalfayan in Athens among others, and in numerous group exhibitions, including Athens: Metropolis by Mistake at the Giorgio de Chirico Art Center in Volos, Greece. 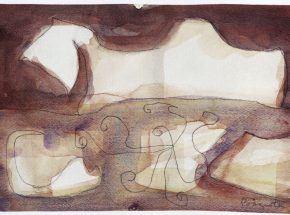