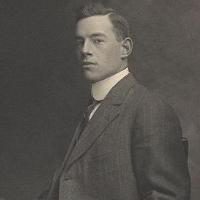 Guy Carleton Wiggins was born in Brooklyn, New York, the son of Carleton Wiggins, a landscape artist who studied under George Inness and in France under the influences of the Barbizon School, and who was one of the founding members of the Old Lyme Art Colony. The younger Wiggins began his studies with his father, and went on to study architecture at the Polytechnic Institution in Brooklyn, New York. Deciding to focus more intently on his painting, he enrolled in the National Academy of Design, in New York City, and later studied under Robert Henri.

Wiggins traveled abroad many times, especially to Paris, and adopted the bright palette and lively brushwork of the Impressionists. He is primarily noted for his snow scenes of New York City, which were often painted from the windows of his friends’ Manhattan offices, and for his landscapes of the environs of Old Lyme, Connecticut, where he lived for many years in an old farmhouse. As a teacher of art, he inspired a generation of young painters; he was among the first to develop the technique of lecturing and painting simultaneously before public audiences.

Wiggins was at the time the youngest American artist to have his work purchased by the Metropolitan Museum of Art in New York City, and his work in included in numerous other collections including those of the Art Institue of Chicago, Illinois, the Brooklyn Museum, New York, and the National Gallery of Art, Washington, D.C.