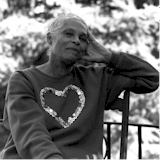 Artist Gwendolyn Knight, primarily known for her figure compositions and portraits, used color and gesture to transform her own life experiences into vibrant visual images. Born in Barbados, Knight came to the United States at the age of seven. Initially, her family resided in Saint Louis, but in 1926 they moved to New York, where Knight began her explorations in art. After attending high school in New York’s Harlem, Knight enrolled at Howard University in Washington, D.C., where she studied with painter Loïs Mailou Jones. Jones’s interest in her own African origins expressed through her painted figures and portraits encouraged Knight to focus on depicting subjects that were part of her own experience. The Depression forced Knight to leave Howard University in 1933 and return to Harlem, a move that proved significant in her career and in her life.

In Harlem, Knight participated in artist workshops, studying painting and sculpture under the prominent artist and educator, Augusta Savage. As Knight’s mentor, Savage became a source of inspiration in her promotion of African-American culture, and she encouraged Knight to work at the Harlem Community Arts Center. During these workshop years, Knight became associated with leading writers and activists of the Harlem Renaissance, such as the poet Langston Hughes and the artist Romare Bearden. In 1934, Knight joined a Works Progress Administration (WPA) Mural project, through which she met her husband, artist Jacob Lawrence.

Knight and Lawrence married in 1941; they provided a constant source of support and critical guidance for one another. One could describe their partnership as a collaborative relationship, inspiring and stimulating each other in their artistic endeavors. Although they were working in the same field as painters, their works differed in approach, style, and perspective. While Lawrence focused on narrative paintings of African-American history and life, Knight concentrated on portraiture, urban scenes, and still life. Devoting most of her career to oil portraits of friends, figure studies of dancers, and watercolor and gouache landscapes, she shifted in the 1990s to lyrical depictions of animals in etchings and monoprints. Knight found inspiration in African sculpture, dance, and theater—her expressive works resulting from a spontaneous, personal response to her surroundings, whether from subjects encountered during her travels or from experiences closer to home.

In the summer of 1946, Knight and Lawrence were invited by Josef Albers to teach at the leading avant-garde art school, Black Mountain College in North Carolina. During the 1950s they worked and lived in New York, and in 1964 they traveled to Nigeria. In 1970, the couple settled permanently in Seattle, where in 1976 Knight secured her first one-person show hosted by the National Links, Inc. After this exhibition, she retained gallery representation, and museums began acquiring her work. Her most recent traveling retrospective in 2003, Never Late for Heaven: The Art of Gwen Knight, was organized by the Tacoma Art Museum. Knight died in Seattle in 2005, leaving a lasting body of poetic works. 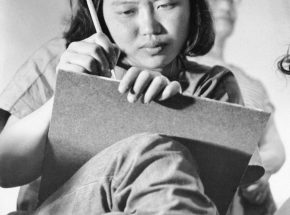