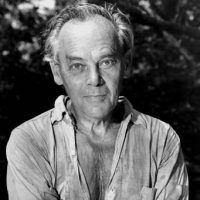 Born in Selyp, Hungary, Gyorgy Kepes studied painting at the Royal Academy of Fine Arts in Budapest. In 1930 he turned from painting to film, largely in protest against social injustices, as he regarded film a more honest and effective medium of visual communication. In Berlin, where he worked on films, stage sets, graphic design and exhibitions from 1930 to 1934, and later in London, from 1935-37, he experimented with the effects of light and shadow on photosensitized paper and on forms of design. In 1937, he came to Chicago to Moholy-Nagy’s New Bauhaus (later the Chicago Institute of Design) where he headed the department of Light and Color.

Kepes’s publications include “The Language of Vision” (1944), a summary of educational ideals and methods, and the “Vision and Value” series (1955-1956), a six-volume collection of essays by natural and social scientists, architects, and critics, examining the frontiers of the language of vision.

In 1946, Kepes became a professor of visual design in the School of Architecture and Planning at the Massachusetts Institute of Technology (MIT), and in 1950 resumed painting on a regular basis. He was the director of the Center for Advanced Visual Studies at MIT until he retired in 1974; held appointments as a visiting professor at Harvard University (1964-66), Artist-in-Residence at the American Academy in Rome (1974-75), Institute Professor Emeritus at MIT; and was awarded an honorary doctorate from the Rhode Island School of Design, Providence.