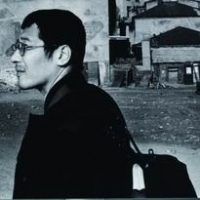 Hai Bo, born in Changchun, Jilin Province in 1962, graduated from the Fine Art Institute of Jilin in 1984 and later studied at the Central Academy of Fine Arts in Beijing. Hai Bo is a conceptual photographer whose work explores themes of history and memory, impermanence, and passage of time. Much of his work is inspired by formal portrait photographs, a mainstay of Chinese popular culture. Hai Bo pairs group photos, taken in the 1970s during the Cultural Revolution, with contemporary re-creations that depict the subjects in the same relative positions. Emty spots in the re-created groupingss evoke time’s passage and hint at the social upheavals of that cataclysmic era. For the past several years he has photographed landscapes, often depicting the same view through the seasons.
He lives and works in Beijing.