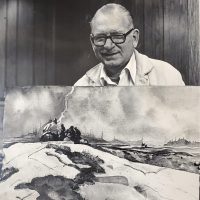 American illustrator and commercial artist Harold “Hal” Kinder (1921-1985) was known for his picturesque oil and acrylic landscapes of hunting scenes and marina life. During World War II, Kinder served in the United States Army for two years, but was discharged after being injured in the line of duty. After graduating from the Cleveland School of Art in Ohio (now the Cleveland Institute of Art) in 1948 and Chouinard Art Institute (now the California Institute of the Arts), Kinder became art director for advertising agencies in Los Angeles, California, and Toledo, Ohio. He was appointed creative director and illustrator in the graphic division of Techway Hall Designers, Inc. in New York.  Kinder was active in the Toledo art scene,  regularly contributing to annual exhibitions from 1958 to the early 1970s.  His first solo exhibition was held at the Toledo Museum of Art from October to November 1963. Kinder’s watercolor, One Sunday Morning, was part of 70 artworks from the Toledo Museum of Art chosen by Art in Embassies in 1966 for loan to United States embassies worldwide.

Kinder was co-founder of the Monday Morning Painters program in the Toledo Artists’ Club. Charter members included notable artists Walter Chapman, Julius Orosz, Ruskin Stone, and Ernest Spring. Their subjects encompass the Maumee River, Lake Erie,  and other scenic areas in northwest Ohio and southeast Michigan. Kinder held memberships at the Kokoon Arts Club in the Cleveland Museum of Art, Art Directors Club of Toledo (of which he was second vice president), and the Perrysburg Monday Artists (where Russian-born artist Israel Abramofsky was a teacher).  His paintings received over 40 awards and were exhibited around the Midwest, specifically at Ohio Northern University, Ada; the Wassenberg Art Center, Van Wert, Ohio; and the Ohio Watercolor Society. He participated in art festivals around the southeastern United States such as the Jefferson Arts Festival, New Orleans, Louisiana. In 1972, Kinder moved from Toledo to Hardin County, Ohio, to establish a private studio, where he remained until he died of a heart attack at age 63.