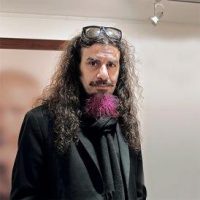 Halim Al Karim was born in Najaf, Iraq in 1963, spending his early years in Beirut, Lebanon. His Family returned to Iraq when Al Karim was nearly 10, settling in the city of Baghdad.

As the first Gulf War erupted in the late 1980’s, Al Karim soon escaped the military, serving under Saddam Hussein by taking refuge in a rock-covered hole in the southern Iraqi desert. He attributes his physical and emotional survival to an elderly Bedouin woman who brought him food and water, as well as educated him about mysticism and gypsy customs.

He emerged from seclusion on occasion, refusing to disclose his whereabouts to his friends or family for fear of jeopardizing their or his own safety. This period had a profound effect on Al Karim, resulting in his everlasting commitments to self-discovery and the expression of his core beliefs through art.

Started in 1985 and continuing today, Hidden is the artist’s earliest photographic theme, incorporating the Sufi concept of “al-batin” in Arabic, one of the ninety-nine names of Allah that denotes “truth” when recited.

Al-Karim’s approach to image-making is as an outward projection of his inner-consciousness and a visual manifestation of spiritual awakening and serenity. His evasive dream-like images evoke a range of instinctual emotive responses, the ability of true perception existing as a preternatural power within each of us, which can be understood and harnessed through the pursuit of metaphysical enlightenment.

Some of the photographs Al Karim presents beneath a tautly stretched layer of silk fabric that operates as both a physical veil masking the portraits and a metaphorical filter or screen. This ’barrier’ between viewer and image can be conceived as a liminal space, a transcendental portal between being and becoming, where the mystical properties of change take place.

Halim Al Karim was nominated for the 2010 Sovereign Art Prize and was awarded the Jury Prize in the International Cairo Biennale in Egypt. He is one of the six artists whose work was featured in the Iraqi Pavilion at the 54th Venice Biennale – the first Iraqi Pavilion in 36 years. His work has been widely exhibited at venues such as the Saatchi Gallery, London, UK, The Venice Biennale, The ZKM Museum of Contemporary Art, Karlsruhe, Germany, XVA Gallery, Dubai, UAE, The Paul Klee Museum, Bern, Switzwerland and The Boulder Museum of Contemporary Art, Boulder, Colorado. Al Karim’s work is also part of numerous public collections, including the Saatchi Gallery, London, Victoria and Albert Museum, UK, The George Bush Presidential Library and Museum, Texas, USA, The Royal Association of Fine Arts, Jordan, Arab Museum of Contemporary Art, Doha, Qatar and L’Institut du Monde Arabe (IMA), Paris, France, the Victoria & Albert Museum in London and the Mori Art Museum in Tokyo amongst others.