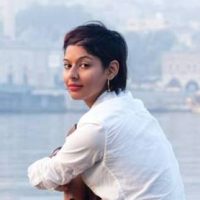 Hamra Abbas was born in 1976 in Kuwait, was raised in Pakistan, and now divides her time between Lahore and Boston, Massachusetts. She was formally trained in the Indo-Persian tradition of miniature painting, receiving her Bachelor of Fine Art degree in 1999 and Master of Arts degree in 2002 in visual arts at the National College of Arts in Lahore. She has also studied at the Universität der Kunste in Berlin, Germany. Her diverse body of art addresses cultural history, sexuality, violence, ornamentation, devotion, faith, and changing societies. She has had solo exhibitions in Dubai, Istanbul, Boston, Mumbai, Karachi, and London.

The artist says of her commissioned work in the U.S. Embassy in Islamabad: “Barakah (blessed) Gifts has been inspired by my visit to Mecca and Medina approximately four years ago. Pilgrimage to these places includes meandering around the markets situated near these sites, bustling with commercial activity. I collected a number of objects of everyday use from gift shops around the two holy mosques located in Mecca—also known as the Grand Mosque—and in Medina, known as the Prophet’s Mosque. Although these objects are collected from commercial markets adjoining religious sites, they are not religious objects, and neither are they used for ritual devotion of any kind in Islam. In one aspect, these gifts are very much like souvenirs and replicas one would buy in museum shops anywhere in the world. Moreover, these objects of everyday use are similar to any other commercial items sold around the world, for example, perfume bottles and clocks.”

“Nevertheless,” she continues, “these various objects are also different due to the incorporation of religious iconography: such as the perfume bottle shaped like a Ka‘ba, or a model of the Medina mosque as a timepiece. In this work, I am interested in this curious intersection, or even paradox, in the case of material objects that are not intrinsically religious but do evoke religious sentiments. I was intrigued by the hybridity of these objects, that is, as ‘non-religious religious objects.’ Therefore, my main interest is in the way these objects appear to the viewer, in their peculiar hybridity and nature of their aesthetics.” She explains, “Barakah Gifts, first of the series, is a flask that is commonly used by pilgrims to carry the holy water (Aab-e-Zamzam), from the spring located near the Ka‘ba. However, in its function as a flask, it can be used to hold any kind of (non-religious) liquid as well. In pre-modern times as well, the flask has served many functions and is a symbolic object on many levels as well. This particular flask has a shiny, golden exterior with an intricate Arabesque pattern on the sides of the flask. Its surface treatment of 24-carat gold tonality makes it an interactive piece due to the mirror effect. The sculpture is made of fiberglass and supported by a metal structure inside to withstand outdoor weather conditions.”