Harold Harrington Betts, (1881-1951), was born in New York City in 1881. He lived in Chicago, Illinois, and Muskegon, Michigan. He was a painter and illustrator and studied under his father, Edwin Daniel Betts Sr.

Betts is listed among the traders and visiting artists at the Hubbell Trading Post in Ganado, Arizona. His visits were recorded in 1908 and 1909, and he returned for many visits for several years later. He is noted as painting a portrait of John Lorenzo Hubbell upon request from Mr. Hubbell sometime in the ninetee-teens. His works are exhibited in the Hubbell Trading Post National Historic Site, Ganado, Arizona. He was the brother of Grace, Louis, and Edwin Daniel Betts Jr.

Biography from Hubbell Trading Post National Historic Site:
“Harold Harrington Betts was an American painter and illustrator who was born in New York City in 1881. He lived in Chicago, Illinois most of his life. He was the son and pupil of Edwin Daniel Betts, Sr., who died in Chicago in 1915. Three of the other sons and one daughter also painted professionally, the most famous, according to one source, being Louis Betts.

Betts probably began painting in the Southwest about 1906. He is best known for his paintings of the Grand Canyon and of Pueblo Indians. His signature ‘H. Betts’ followed by the year (sometimes the full year, sometimes only the last two numbers of the year) appears on most all of his paintings. Titles of paintings listed in the Smithsonian’s inventory indicate he worked at the Rio Grande Pueblos from Taos to Santa Domingo; in Colorado Springs, Colorado; at the Grand Canyon, on the Navajo and Hopi reservations, and in Southern California. Most of these paintings are in the Santa Fe Railway collection.

A painting, ‘Hostiles in Camp Near Oraibi, Arizona’ or ‘Hopis at Hotevilla,’ in the Hubbell Trading Post Museum, relates Betts’ witnessing of that sad day in Hopi history, September 7, 1906, when the Hopis, called ‘hostiles,’ were driven from their homes by the Hopis called ‘friendlies.’ The latter were friendly to the Federal government. Betts described that scene in a letter to the Indian Service. 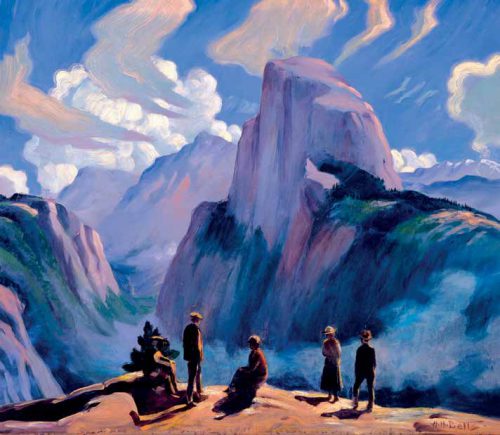