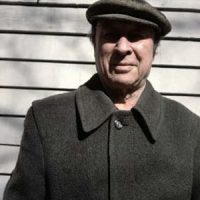 Harry Morey Callahan (October 22, 1912 – March 15, 1999) was an influential twentieth century American photographer. Born in Detroit, Michigan, he began teaching himself photography in 1938. He formed a friendship with Todd Webb who was also destined to become a photographer. A talk given by Ansel Adams in 1941 inspired him to take his work seriously. In 1941, Callahan and Webb visited Rocky Mountain State Park but didn’t return with any photographs. In 1946 he was invited to teach photography at the Institute of Design in Chicago by László Moholy-Nagy. He moved to Rhode Island in 1961 to establish a photography program at the Rhode Island School of Design, teaching there until his retirement in 1977.
Callahan left almost no written records-no diaries, letters, scrapbooks or teaching notes. His technical photographic method was to go out almost every morning, walk the city he lived in and take numerous pictures. He then spent almost every afternoon making proof prints of that day’s best negatives. Yet, for all his photographic activity, Callahan, at his own estimation, produced no more than half a dozen final images a year.
He photographed his wife, Eleanor, and daughter, Barbara, and the streets, scenes and buildings of cities where he lived, showing a strong sense of line and form, and light and darkness. He also worked with multiple exposures. Callahan’s work was a deeply personal response to his own life. He encouraged his students to turn their cameras on their own lives, leading by example. Callahan photographed his wife over a period of fifteen years, as his prime subject. Eleanor was essential to his art from 1947 to 1960. He photographed her everywhere – at home, in the city streets, in the landscape; alone, with their daughter, in black and white and in color, nude and clothed, distant and close. He tried several technical experiments – double and triple exposure, blurs, large and small format film.
In 1950 his daughter Barbara was born. Even prior to her birth she showed up in photographs of Eleanor’s pregnancy. From 1948 to 1953 Eleanor, and sometimes Barbara, were shown out in the landscape as a tiny counterpoint to large expanses of park, skyline or water.
Callahan was one of the few innovators of modern American photography noted as much for his work in color as for his work in black and white.
In 1996, he was awarded the National Medal of Arts.
Callahan died in Atlanta in 1999. He left behind 100,000 negatives and over 10,000 proof prints. The Center for Creative Photography at the University of Arizona, which actively collects, preserves and makes available individual works by 20th-century North American photographers, maintains his photographic archives. His estate is represented in New York by the Pace/MacGill Gallery.

Photo courtesy of the Estate of Jonathan Williams