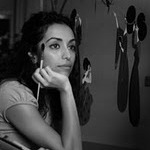 Hayv Kahraman was born in Baghdad, 1981 and currently lives and works in the US. She is a graduate of the Academia di Arte e Design di Firenze, Italy. Born in a land that is ironically the cradle of civilization and presently a landscape of significant human degradation, Iraq, I find myself with a cultural and personal inheritance that finds expression in my work.

In 2010, a new series of works, inspired by her own experiences as an immigrant and played out through the imagery of common playing decks of cards will contrast the lives of people embodying the Iraqi Diaspora, both before in their homeland and after in countries where they have begun new lives
.
“Migrant 5. From the series “Waraq” and Al-Malwiya embodies a conflicting dilemma of traditions, customs and language within the Iraqi Diaspora. Each card reveals the duality of the Iraqi immigrant’s life in the homeland versus life as a refugee. The instability of identity and loss of sovereignty play a key role and are
represented by the artificial origami bird held in the characters hands. “

Working mainly in oils, Kahraman focuses on qualities of line, depth and detail. Using two-dimensional tones of vibrant color and semi realistic renderings of her swan-like figures, she challenges issues of gender, honor killings and war.
Harmonizing references from Japanese art, Islamic art, and Italian masters, Kahraman offers an aesthetic awareness that honors diversity and offers the possibility of redemption and empowerment.