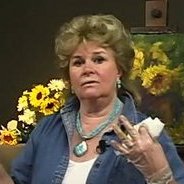 Hedi Moran combines realism and impressionism in her rich and lively still life oil paintings. Bathed in a sunlit rush of light and vivid color, her florals resonate with a freshness and spontaneity that mask carefully cultivated composition and brushstrokes.

An award-winning artist, her paintings have appeared in numerous art exhibits throughout the country, including several juried shows sponsored by Oil Painters of America and Salon International. In addition, she is a three-time finalist in the “Flowers & Garden Competition” sponsored by International Artist magazine. One of her paintings, “Antique Roses,” was recently exhibited at the residence of the United States Ambassador to the United Nations in Geneva, Switzerland. And she recently lectured at the Phoenix Art Museum, where she discussed “Inside the Painting Process” while demonstrating floral still life painting.

Hedi also conducts oil painting workshops throughout the United States, in Canada, France, and Norway (where her classes are taught in Norwegian).

Her paintings have been featured in Workshop Magazine, Art of the West, International Artist, and Kunst for Alle, a leading Scandinavian art magazine. Her work appears in “100 Ways to Paint Still Life & Florals” and “How Did You Paint That? 100 Ways to Paint Flowers & Gardens,” published by International Artist magazine. Her paintings also have appeared in “The Best of Flower Painting” by North Light Books. She also has several DVDs produced and distributed by Liliedahl Video Productions, including videos entitled “Sunflowers,” “Lilies,” “Poppies and Cantaloupes,” and “Roses.”