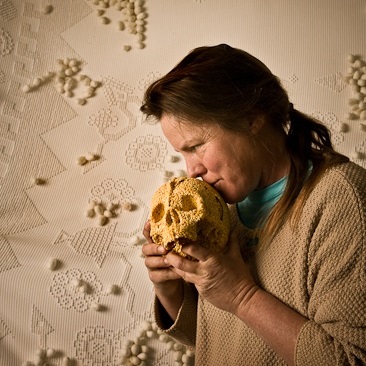 Helen Altman was born in 1958 in Tuscaloosa, Alabama. She received a Bachelor of Fine Arts degree from the University of Alabama Tuscaloosa in 1981, and a Master of Arts degree from the same institution in 1986. Later that year, she entered the graduate program at the University of North Texas, Denton, where she studied with Vernon Fisher, and received a Master of Fine Arts degree in 1989. Her many honors include a 1999 Otis and Velma David Dozier Travel Grant from the Dallas Museum of Art, Texas, and a 1993 National Endowment for the Arts award through the Mid-American Arts Alliance. Her work has been represented in many group and solo exhibitions throughout the United States and abroad, and is in the collections of the Dallas Museum of Art and the Museum of Fine Arts in Houston, both is Texas. Altman lives and works in Fort Worth, Texas.

Helen Altman’s torch drawing technique involves using an actual propane torch to burn images into water-soaked paper before it ignites. This is an unforgiving method, requiring that the artist work quickly and allowing for no second chances. The images of the animals, from bears to pigs to giraffes, develop out of the varied hues of brown left on the paper by the flame, and play off the whiteness of the paper upon which each figure appears to float. The works are surprisingly naturalistic with a palpable sense of physicality and depth. 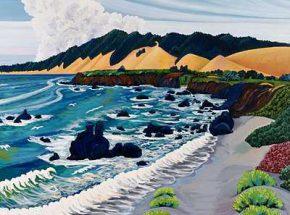