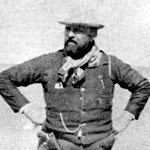 Farny was born in 1847 in France, but was raised near Warren, Pa., after his family fled to escape Napoleon’s regime. It was there that the Seneca tribe intrigued young Farny.

After his father died in 1863, Farny left Woodward High School to help support his family. He became an illustrator in the New York office of Harper’s Weekly.

After a year he made his way to Europe. He studied landscape painting before returning to Cincinnati where he worked as an illustrator for magazines, children’s books and circus posters.

Farny’s best-known work took shape after a three-month trip West to the Dakota Territory in 1881. He had hoped to meet Sitting Bull, but the great Sioux chief had been sent away as a prisoner of war.

Farny stayed on making sketches and gathering artifacts from which he began to paint nostalgic images of the West. These paintings would define his career.

In the following 13 years, Farny made four more trips West to gather material for his paintings, including a 1,000-mile canoe trip down the Missouri River.

Farny painted his subjects in a realistic style but in romantic idealized scenes. Some of the paintings depict incidents that he probably never witnessed.

According to biographer Denny Carter, Farny was primarily a conservative artist. But because of his European training, he was able to incorporate advanced ideas – Japanese printing techniques, the use of photographs, the lighter pallette of the Impressionists – into his work.

“This blend of old and new concepts contributed to Farny’s convincing realistic style,” he writes, “and accounted for his unique vision.”

Farny was also a bohemian, a wit and raconteur who was in great demand as an after-dinner speaker. He counted among his friends Theodore Roosevelt and Sarah Barnhardt and wrote short stories, acted in amateur theatricals and was a talented cabinetmaker.

“His paintings, minutely and accurately described, exhibit a nostalgia for an exotic land and people,” Carter says. “Farny told his story of the Indian, but most of all, he painted the Plains Indians’ country.”