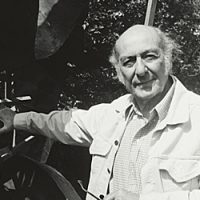 Born in New York City in 1906, in 1927, Herbert Ferber began studying sculpture at the Beaux Arts Institute of Design in New York, and later continued at the National Academy of Design, while also attending Columbia University Dental School. Ferber belonged to the first generation of Abstract Expressionists. He participated in the First American Artists’ Congress in 1936, and was a founding member of the Federation of Modern Painters and Sculptors.

The sensibility of Ferber’s earlier sculpture has much in common with the work of Seymour Lipton and Ibram Lassaw. In 1944, he began working in welded metal, allowing for a lighter, more open and calligraphic formal vocabulary, which led to his signature “roofed” sculptures and “cages.” In 1950, Ferber was awarded his first architectural commission, for the façade sculpture, And the bush was not consumed . . . , of the B’nai Israel Synagogue in Millburn, New Jersey. During the 1950s, he was an early conceptual innovator of Sculpture as Environment, and his eponymous work was installed at the Whitney Museum of American Art in 1961. Painting was an equal focus of his artistic work throughout Ferber’s career.

Ferber had his first solo exhibition in New York in 1937, and the 1947 inaugural exhibition of his work at the Betty Parsons Gallery was accompanied by a catalogue written by his colleague Barnett Newman. His first museum major retrospective was presented in 1963-63 at the Walker Art Center.