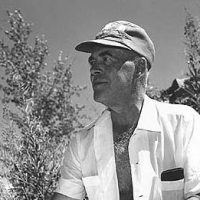 Born of a missionary family in Amoy, China, Horace Day spent his first eighteen years there and was educated at the Shanghai American School. He moved to New York City in 1927 and studied for five years at the Art Students League. He then won Tiffany Foundation Fellowships and spent two years as artist-in-residence at Lillian D. Walk’s Henry Street Settlement. Day’s love affair with the American South began in 1936, when he arrived in Augusta, Georgia, to become the first director of the Herbert Institute of Art. He began to paint in the Low country, a geographic and cultural region located along the coast of South Carolina, recording the area’s character with rare sensitivity. In 1941 Day joined the art department of Mary Baldwin College, Staunton, Virginia, where he taught for twenty-five years, eventually co-chairing the department. During World War II, he was given leave to serve in the Army, but he continued to paint. Works from this period were exhibited after the war at the Whitney Museum of American Art in New York City, and at The National Gallery in London. After the war, Day returned to Mary Baldwin, where he remained until his retirement in 1967.