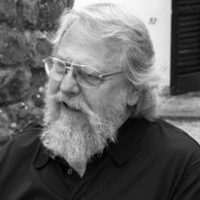 As an artist, Farlowe’s career alternated between years spent as a painter and long periods as a stone sculptor. Usually consisting of asymmetrical arrangements of multiple components, his large-scale sculptures are architectonic with lintels and benches inviting the viewer to enter the work. The artist favored the white Georgia marble from his home state, which was the stone selected for Circular Rest. This work was formerly on exhibit in the Domestic Arts Building for the Spring 1998 Exhibition and is now sited in the sculpture park near the lake. Repetitions of arcs, circles, and spheres unify the composition, while the smooth mat surfaces throughout add to the harmonious balance of the elements. Portal Rest, 1999, is another multi-element sculpture in white marble, is installed in the park near Rat’s Restaurant.

Farlowe had exhibited his sculpture at many college campuses and galleries in Georgia and North Carolina. He was awarded prestigious commissions for public sites, including the North Carolina Zoological Park in Ashboro, and the Cumberland County Public Library, Fayetteville, NC. Other sculptures have been acquired by the Mint Museum and the North Carolina Museum of Art, both in Raleigh, as well as by many corporate collections. He also taught sculpture at several southern colleges, most notably at the University of Georgia in Athens since 1980. Farlowe passed away on April 8, 2006.