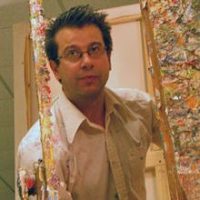 Houben Tcherkelov is a Bulgarian painter and experimental artist who lives and works in New York. In his early photographs, film, and installations post-communist Bulgaria and Bulgarian art is a recurrent theme. In his more recent work, Tcherkelov paints images from American and other national currencies using impasto, glaze, and watercolor techniques. In all of his work the artist seeks to suggest the way in which symbolic images legitimize national power.

Houben Tcherkelov was born in Kardzhali, a town in southeastern Bulgaria. Tcherkelov studied painting at the National Academy of Arts in Sofia, Bulgaria’s capital, and was associated with the radical movement around the XXL Gallery.

Tcherkelov’s early works in Sofia analyze space and life structures in a society transitioning at once to a new social system and acclimating to the rapid pace of globalization. Freezing, a 1994 exhibit of frozen animals in Sofia’s National Museum of Natural History (Bulgaria) pointed to the moribund state of museums in Bulgaria, grossly out-of-sync with the normal pace of events. Perhaps Tcherkelov’s most well-known work from his series of interventions is Suitable Suit, a video still from which served as the cover of Menschenbilder: Foto- und Videokunst aus Bulgarien. In this video the artist lumbers through a field in a suit many sizes too large. Tcherkelov’s analysis of Bulgarian society culminated in Reality Show (1998), a video that, with numerous art historical references, satirizes the affluence and decadence of the international film and music industry transferred to Sofia.

In 1995, Tcherkelov studied impasto painting with Jörg Immendorff in Amsterdam with a grant from the Felix Meritis Foundation. Not until he arrived in New York City in 2000, however, did he begin to work exclusively using this technique. Art critic Eleanor Heartney, in an introduction to Tcherkelov’s series of impasto paintings based on these images, writes that they present “symbols mined from American currency as keys to understand national dreams and fantasies.” Concentrating on details in both new and old currency, Tcherkelov “exhumes their meanings and contradictions, revealing the subliminal power that currency images have.” Artist, musician, and performer Genesis P-Orridge writes of one of Tcherkelov’s paintings that “it seemed to explode with sheer exuberance.” He continues: “We wonder how the artist trapped a living spirit inside the painting and yet maintained its happiness!”.