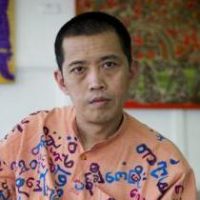 Htein Lin was born in Mezaligon, a village north of Henzada in Burma’s northern Irrawaddy Delta, where his family owned a small sawmill. He began painting and performing while still at school, and continued at Rangoon University while studying for a law degree, a subject he chose for its performance possibilities. In March 1988, he was one of a number of Rangoon University students who were expelled for protesting the authorities’ failure to properly investigate the death of fellow student Phone Maw. These protests were the first step that led to the ‘democracy spring’ in August/September 1988 that preceded the clampdown by the military that remain in power today.

After leading the protests in Mezaligon during that period, Htein Lin joined many other activists and fled to the Indian border where he joined the All Burma Students’ Democratic Front (ABDSF). While in exile he studied painting for a couple of months under Mandalay artist Sitt Nyein Aye, and illustrated the ABSDF’s publications. In 1990 the Indian government informed the ABSDF that they could no longer stay on Indian territory if they carried arms. Htein Lin left for an ABSDF camp inside Burma which was shortly afterwards overrun by the Burmese army. Carrying a typewriter, Htein Lin crossed the jungles of Northern Burma to join their comrades in Kachin State on the Chinese border, using a stick to draw in the mud during breaks in the journey.

Only about twenty of them survived the journey. In late 1991, he was caught up in the internal conflicts in the ABSDF and along with 80 fellow students he was imprisoned and tortured for allegedly being an informer. Some 20 of his comrades were summarily executed on 12 February 1992 or died from torture. The others were kept in captivity for seven months, until they escaped to China, where they were caught and handed back to the Burmese military government. They were permitted to officially ‘surrender’ and Htein Lin resumed his L.L.B. law course, graduating in 1994.

In 1998, he was arrested and sentenced to 7 years imprisonment, charged on the basis of an intercepted letter from an erstwhile ‘comrade’ which listed names of those to be contacted to see if they were still interested in opposition activity. He was unaware of the letter until his arrest. After sentence, he was transferred to Mandalay Jail, where he was forced to improvise to continue painting. Using the white cotton prison uniform as a canvas, he paid for paints to be smuggled into the jail. In the absence of brushes, he used his fingers, cigarette lighters, syringes, carved soap, and dinner plates to make his mark. In Mandalay he performed a piece ‘0 + 0 + 0 = 0’ (1999) for the amusement of his fellow prisoners.

Conditions in Mandalay jail were particularly harsh, and in 2000 political prisoners in protested for better conditions, including in Htein Lin’s case, the right to paint. The protesters were beaten and dispersed to other jails and he was sent to Myaungmya in the Irrawaddy Delta, a small town where George Orwell spent three miserable months on his first posting as a colonial police officer. Htein Lin was punished with seven months spent in solitary confinement on death row in the jail, built by the British in 1900. Happily conditions in Myaungmya were not as bad as Mandalay for most of the time, and it was not far from his hometown. Once out of solitary he continued to paint, using the same techniques and materials he had developed in Mandalay. He also developed three more performances ‘The Fly’ (2001), ‘Cleaner’ (2002) and ‘Life’ (2003).

In November 2004, six and a half years into his sentence and over 200 paintings later, he was released. The authorities informed him that, following a review of the files after the arrest of the Prime Minister General Khin Nyunt and most of his Military Intelligence team, they concluded that there had been no case against him (as Htein Lin had always maintained).

Htein Lin returned to Rangoon, and returned to painting, continuing with the ‘Other World’ series, large paintings on the cotton cloth he had grown used to using as a canvas. In June 2005, he briefly exhibited a selection of his prison paintings , in his 3rd solo show entitled 00235, named after his prisoner number from the International Committee of the Red Cross (ICRC) who visited Mandalay and Myaungmya jails while he was there.

His work from prison was shown at Asia House (London) in 2007. He has had exhibitions in Thailand, Hong Kong, Bath (UK), London and Turin in 2008. Two of his paintings have been purchased for the new US Embassy in Yangon. Others are in Belgium, Netherlands, Hong Kong, Malaysia, Romania, Singapore, Spain, Sweden, Thailand, US and UK. He is currently working out of London, and in addition to art and performance, he continues to contribute writing and illustrations to magazines back in Burma. He was a member of the selection panel for the first Freedom to Create prize , results announced December 2008 and will be a judge for the Koestler Trust prison arts competition in 2010.

Htein Lin sees himself as an artist, not a political activist. But while he regards art used in the service of politics as something that insults the value of both, he believes political events can inspire art, and those events can sometimes even swallow up an artist. When the artist emerges, he will be changed by the experience, and thereby become the painting, and no longer the painter.