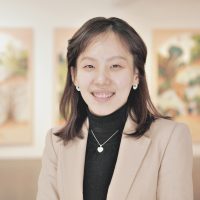 Lim Hyun Kyung is a young artist who explores the cycle of life and seeks a new way of oriental painting through the work of landscape. The artist’s work is inspired by a background of the Christian faith; she meditates the Bible’s “The Parable of the Sower” and expresses a way and stage of living in her painting as an artist and also human being. “The story of tree, stone and bird (2010)” series are from a theme which has been experimented since undergraduate years to find artist’s own visual language techniques from a traditional painting of flowers and birds. On a vertically long canvas as a folding screen or a scroll, Combining falk painting forms in the late of Chosun Dinasty with a flat and simple drawing is used in order to be seen like a modern painting. Colors of ocher and green display the natural features with theme and have environmental messages.

These series of works talk about the cycle of life such as life and death, birth, prosperity and decline. These topics are drawn in a picture like a scroll or serial paintings. She reflects on a tree as herself allegorically, and wants to draw the journey of life; encountering birds, rocks and other natural environments, getting stronger and growing up. The tree, its roots grow into the earth over the sky, resembles human beings the
most. And it’s the nature and cosmic clock tells periodic life changing from seasons the first. Young leaves are changed and disappeared over time, branches get thicker with more growth rings and also cherish the depth of life. And the tree bears all the colorful flowers and fruit. From this tree, we are able to know the secret of life cycle called birth, youth, maturity, old age and death. Lim Hyun Kyung may depict healthy trees, grew on the rich soil without any discouragements, occupy the entire screen as a hero. And also the artist may draw some part of tree since the overall shape is hidden by poor and tough environment looks like rock. On the top of the sky, a tree looks plentiful and free while using and avoiding the fixed solid rocks. This scene shows the fluid nature of the subject with the birds, flying around freely and influencing surroundings, and it brings vitality and liveliness too.

Recently published “Garden of the Mind (2010, 2011)” series are works that the artist is more interested in pursuing the subject and pictorial depth in mental and spiritual ways. These series are in the form of a western altarpiece that composed of a total 5. Two paintings are the entrance to open and close; when they are opened, three-wide plates are seen. The front entrance implies the whole subject ‘the cycle of life’; it combines the two plates are drawn to be a scene which is rocks, trees, flowers and birds painted on
the empty black scenery.

A technique, darkening the korean paper and putting a bright tone on it, is obtained by repeated delicate touch of the brush. At this point, viewers feel the artist’s effort and serious manner to achieve light colors, a symbol of purification, from a dark background. The artist aspires toward something noble, therefore her works are presented a relaxing atmosphere nicely even though they are painted in great details.
A painting on the left of the exterior is the symbol of spring and summer, all creation is fresh and vivid. There are rock scene representing civilization and two bird in their time flying up towards the unknown world. The right painting is crowded with a whole of lots bare trees.

It’s a winter time, everything declines after bountiful days, and two birds strayed apart make their way. However, at the bottom of the painting, that looks like a female bird is carrying a new life inside of her. It gives a beginning of life cycle filled with a hopeful feeling because her head towards the rich left side. For that reason, stability for next year is promised in peaceful and stable place although it’s under the naked trees. Another indication is a contrast between barren rocky landscape with vibrant energy and calm land heavily influenced by the death. The exterior looks like the image of dreams and fantasies because of black colors, and the interior seems to be realistic landscape for the bright background.

On the middle screen of inside, it’s imaged the center of well-maintained garden with magnificent rock, lush trees, a fountain welling its water strongly. And then the edge of the landscape is disposed respectively without boundaries between the sky and water on the left and right parts. In fact, closely described grass, leave, branches, rocks, and birds are compared to flat background and round gold portion on the top contrastively; so that the real images look surreal recorded painting. The contents of the picture on the
left and right are protected from the nature; rectangular frame and rods, straps, etc. are used to sustain the trees. Birds resting on branches use civilization in nature. In “Garden of the mind” series, water appears not only to give well-landscaped comfort but also it makes the view dramatically and lively by flowing fluid figures.

The picture image is composed of a circular structure and variety of water figures, vertically a fountain pouring down through the holes and also horizontally producing, thus it’s animated. Lim Hyun Kyung’s work has more stories than obvious images in paintings; there are subversive and conversion symbols of yin and yang, good and evil, life and death, civilization and nature. Within the laws of life, universe, and nature, all
things are connected like a mesh with each other such as a circular cycle. In this age of new and dazzling images, Lim Hyun Kyung reinterprets the world with classical symbols and the artist would catch a utopian dream “truth and root” through altarpiece form. As Jean Baudrillard said ‘Art is a special language moving according to its own rules’, Lim Hyun Kyung is considered to be expected one who matches the form and manner to create her own artistry.