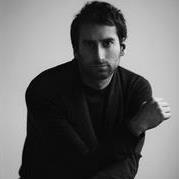 London-based artist Idris Khan was born in the United Kingdom to Pakistani parents in 1978 and completed his master’s degree with a distinction in research at the Royal College of Art in London, England, in 2004. Since then, he has received international acclaim for his minimal, yet emotionally charged photographs, videos, and sculptures that exist between the abstract and the figural, often blending abstract expressionism with Islamic philosophy. Khan has been recognized as one of the most exciting British artists of his generation. His works reference literature, history, art, music, and religion in layered imagery that can range from the Qur’an to Caravaggio. He is best known for his work in 2004, for which he scanned every page of the Qur’an, condensing and digitally layering the images into a beautiful creation.

His commission by Art in Embassies resulted in a new composite work—a stamp painting with English text and Arabic calligraphy—for the U.S. Embassy in Islamabad. The Essence of Existence is one of a series of eleven works of art using a stamping technique, in which the artist layers different sentences stamped in ink on top of one another to ask and answer existential questions.

“When I read all those books on Islamic philosophy by famous Arabs scholars, what stayed with me were the passages about the creation of the world,” the artist explains. “I began to think deeply about my own process of creating art, and I expressed my thoughts through short poems and passages that question what art is and look at the artist as creator, examining the daily ritual of coming to the studio, beginning with a blank canvas and ending with the creation of a piece of art. These words became the starting point of my new series.” The layering of words begins to create a space that transcends their meaning and reveals a mystery that exists within the drawings.

Stamping is deeply connected to the artist’s Islamic roots: “I have had to deal with the death of two loved ones. I turned to religious philosophy for solace, and I found new hope in the philosophy behind the ritual of Ramy Al Jamarat, performed during hajj. This act of throwing stones at the devil’s wall is a way of casting away bad thoughts and cleansing your mind to stay close to the divine. I used the concept in my art by writing down my negative thoughts and grief, putting the words on stamps and pressing them to paper. The radial patterns I created looked like stones hitting a wall, and the rhythmic meditative act of repeatedly stamping away my worries helped me to heal.”

His work is in the permanent collections of many institutions worldwide such as The Saatchi Collection, London; the San Francisco Museum of Modern Art; the Solomon R. Guggenheim Museum, New York; the Tel Aviv Museum of Art; the Art Gallery of New South Wales, Sydney; the Philadelphia Museum of Art; the de Young Museum, San Francisco; and the Centre Georges Pompidou, Paris. 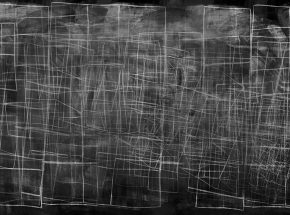