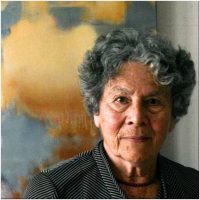 Jacqueline Gourevitch began exhibiting in Chicago in the mid-50’s while still a student at both the University of Chicago and the School of the Art Institute, and after a summer session at Black Mountain College in 1950. Since then she has had more than thirty Solo shows, here and abroad and participated in numerous group shows. Her paintings are in the collection of the Wadsworth Atheneum, the Menil Collection, Yale University Art Gallery, Ashville Art Museum, The Museum of the City of New York, and the Morgan Library and Museum among others, as well as in many private collections, both here and abroad. She has had grants from the National Endowment for the Arts, the Connecticut Commission for the Arts, the Florsheim Foundation, Tamarind, and a 1% for Art in Public Spaces commission. In 2004 The American Academy of Arts and Letters awarded her its Academy Award, and in 2012 she was elected a member of the National Academy. Over the years she has taught at Wesleyan University in CT, at the University of California, Berkeley, and most recently at the Cooper Union, among others. Having come “of age visually” at the height of abstract painting, her works have engaged and referenced a wide range of subjects and ways of painting. Yet, the issues central to her concerns as a visual artist have remained constant. This is perhaps best conveyed by various “statements” she has made for exhibitions over the years: “My work is deeply grounded in close observation of the world around me, both natural and man-made, yet always as involved with the process of painting as with the act of seeing.” “Painting is deeply about seeing, contemplating appearances, about how to understand and represent what is out there visually.” “The appearances are not superficial. You never see more than the surface.” “Paintings that invite close scrutiny and reveal themselves gradually over time, like the world around us, have always had a special meaning to me. They allow for reflection and meditation. I aim for that.” She began her on-going series of Cloud Paintings in the mid-60s, titled as such and numbered in the sequence of their making. Currently (12.2010) she is working on Cloud Painting #232 , 72″x44″. “For many years now I have been painting clouds, mostly in my studio, often working on a painting for months, sometimes years. To paint clouds is to try to understand and visually to grasp a fugitive phenomenon, subject to constant motion and change. I paint with and about natural light in the conviction that this keeps me in touch with the true state of things, perpetually on edge, awaiting what comes next. No boredom here.” “Clouds are reliably unpredictable: useful training for daily life, not only in times like these. Observing clouds sculpted by gravity and wind, revealed by the sun and moon, is a universal experience. I like that. It keeps me accountable as a painter.” After her Artist Residency at the World Trade Center in 2000 she continued painting the City seen from a 37th floor window facing South on lower Broadway, and more recently from a 48th floor in Lower Manhattan overlooking Ground Zero and the NY Harbor. “The Cloud Paintings may at first sight seem very different from the City paintings, but they inform and complement each other, they are painted side by side, and they hang side by side in my studio. They reflect the range of my interest in nature and in our urban constructed universe. “ 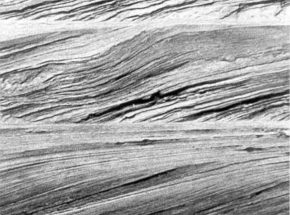