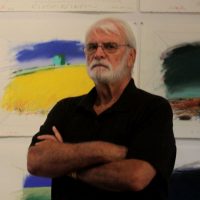 James Bumgardner received a B.F.A. from Virginia Commonwealth University. He also studied with Hans Hofmann, a German artist who moved to the United States in the 1930s and whose abstract, Cubist-inspired paintings were extremely influential on many young artists during the mid-twentieth century. Under Hofmann’s influence, Bumgardner became an abstract expressionist painter for most of his career. The abstracted forms in this enigmatic painting include a reclining woman, an owl, and a table.