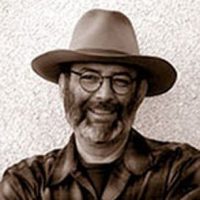 Native American painter and printmaker James Lavadour is of Walla Walla descent, a member of the Confederated Tribes of the Umatilla Indian Reservation, in Northeastern Oregon, where he grew up and still lives and works. He is best known for kinetic landscape paintings that are evocative of the geological forces that shaped the earth of his homeland, the Blue Mountains of Eastern Oregon. Working in tones of earth and fire, Lavadour uses processes of layering and scraping that over millennia also formed the hills and ridges around his reservation. According to Lavadour, the work does not merely reflect his heritage or simply depict his understanding of the land. The work is energy and existence, nature, discovery, and universal truths as much as it expresses personal epiphanies.

Founder of the Crow’s Shadow Institute of the Arts in 1990, Lavadour began a body of work in 2000 that came to him with a force that he describes in volcanic terms—an explosion, an out-flowing of energy. “I believe that a painting must stand up on its own without explanation,” he states. “I think of myself as an abstract action painter. I just happen to see landscape in the abstract events of paint.”

Lavadour has exhibited at the Venice Biennale, and in Savannah, Portland, Seattle, and Tacoma among other locations.