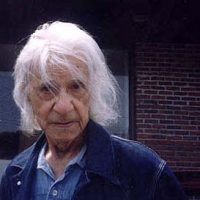 Born in New York, James Lechay received his BA degree from the University of Illinois in 1928, majoring in psychology. He studied art privately with his brother, artist Myron Lechay, but otherwise was self-taught as an artist.

Lechay taught painting and drawing at the University of Iowa starting in 1945 until his retirement. He also taught workshops during summers at various other institutions such as Stanford, New York University, and the Skowhegan School of Painting and Sculpture.

During the course of his career he received countless medals, awards and honors for his work. He had numerous one-man exhibitions and a retrospective at the University of Iowa in 1972 when an exhibit catalog entitled “James Lechay” was created. He is represented in many permanent collections including the Brooklyn Museum, Chicago Art Institute, Joslyn Art Museum of Omaha, Metropolitan Museum of Art in New York and the Des Moines Art Center.

The painting by Lechay in the Fine Arts Collection, “City with Roman Portrait,” was acquired after a one-man exhibit at the Luther College Centennial Union in September 1971.